Music tuition is a common experience for children throughout their school years and a lot of those stories are very similar.

Using rented equipment in a one-on-one session with a tutor, prodigy musicians make their way through the seemingly never-ending list of grades and qualifications – the exact experience that Mike Heaps of Room For Music had. That was until he decided to do something about it and revolutionise music teaching for the next generation.

He said: “Room for Music was established about eight years ago now. My goal was to provide an alternative approach to music tuition and specifically contemporary music tuition.

“Rather than one-on-one lessons, which is how most young people learn an instrument, I wanted to focus more around a group workshop style of teaching. I was trying to encourage those kids that were sat in their bedrooms and playing drums or guitar on their own to come together, start a band and get out there gigging and performing as real musicians.”

Always a passionate musician before establishing his business, Mike knew that he wanted to be involved in the industry but that opportunity wasn’t initially forthcoming, instead forcing him to make a decision on his career, eventually heading into business and IT.

Having been there for 15 years, he realised it was soon time for a change, with his experiences as a young musician giving him the inspiration to set up Room For Music and help other fledgling musicians.

He said: “I decided to take the plunge and took a teacher training course in my spare time specifically geared towards music education. I just wanted to learn how to impart my knowledge and my musical skills to other people and then the idea came out of that.”

Upon investigating the current market, Mike discovered that there was nothing locally that was offering a place for users to come together to play and practice. Hence, Room For Music was born.

“While I was doing that course, I thought I’d have a look around and see what other people were doing,” he continued. “I saw there was some franchise opportunities out there but none of them fit exactly to what I wanted to do.

“We now offer a range of workshops for school kids aged five and up. We’re running sessions three or four nights a week and we get groups of five or six students together in a rehearsal room all playing their instruments and learning songs that they know and love.”

There was only one problem though – getting the funding required to afford the equipment, instruments and premises needed to make Room For Music a success. Enter, Sir Thomas White Loan Charity.

Applying for an interest-free business loan, Mike was pleasantly surprised by the application process itself in the sense of how professional it was and how much focus there was on actually making his company a success.

He said: “The good thing about the application process was that it kind of brought you back down to Earth a little bit. I knew I had a good idea and there was a market there for it, but it made me think about the practicalities of making it a success in a lot more detail. Having that resource at STWLC to review that with you and go through the panel process was really beneficial. I found it really useful just to question what I was doing and if it was a solid business plan.”

Throughout the whole time he was in contact with the charity, Mike continued to be impressed by their total commitment to him, as well as the durability of their loans – an aspect that he suggests sets them apart.

He said: “There’s real security that you can focus on your business, get it going and achieve your goals without a massive interest rate hanging over your head and constantly worrying how you’re going to pay back a loan as well as make a success out of your new business.

“I actually recommend it to people quite regularly. Anyone that comes to the studio and is looking to start something up, but doesn’t know where to look in terms of raising funds, it’s an invaluable service. With most new business funding opportunities you come across, there are some with low interest rates, but very few that give you that grace period to set up your business and get it running. I can’t recommend it enough really.” 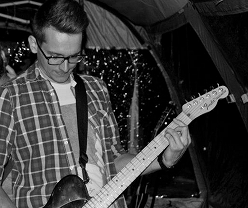 Without Room for Music, he would also have not been able to establish studio facility Brickwork Studios in 2016, allowing them to move out of their previous home of a rented church hall, indicating the sheer influence that his STWLC business loan has had upon his musical life.

That drive to help young musicians has never abandoned Mike even now. As a matter of fact, he recently set up Somewhere Records, a community record label in Market Harborough, with the target of publishing original music. So, with his own company and record label, it would be fair to assume that he is no longer that frustrated musician practicing on their own.

To find out more about Mike and his work with Room For Music and Somewhere Records, please visit either www.roomformusic.co.uk or www.somewhererecords.co.uk