Eyes on the Pies

From festive foundations, Melton-based Incredible Pies has established a reputation for delivering a wide variety of tasty treats, suitable for satisfying even the toughest of sweet teeth – with The Sir Thomas White Loan Charity playing a small part in the company’s growing success.

Established by Pete and Rob Sharpe, who applied for an interest-free business loan from the Charity in order to develop his start-up, Incredible Pies has now gained a strong customer-base following its presence at food events in Leicestershire and beyond.
“The idea for Incredible Pies came from my brother, Rob,” explains Pete. 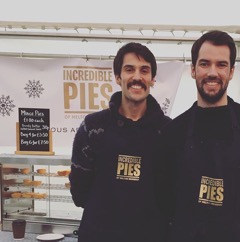 “He had the idea to produce a selection of luxury mince pies at Christmas. We wanted to try something and hadn’t really seen anyone doing what we wanted to do at the luxury end of the market – so things started from there.

“The mince pies went down so well that we developed a range of dessert pies. We now have a range that includes apple pies, cherry pies and strawberry crumble; with the strawberry and cherry offerings proving to be very popular.”

Prior to The Sir Thomas White Loan Charity getting involved, Pete and Rob were able to test the waters through exploring the market first-hand – a great way of building research and getting a taste for public demand.

“Initially, we self-funded the business. I put in half the money and my brother the other half. We booked to feature at Christmas markets around Leicestershire and beyond to test the market for our products.

“The events went well,” Pete added. “It gave us the encouragement we needed, knowing that we had something that people liked.”

Following the success of trading at Christmas markets, Pete got in touch with The Sir Thomas White Loan Charity, which he found out about through the local council in Melton Mowbray. It’s a decision that Pete is delighted he made.

“After Christmas, we decided this was something to take seriously and we needed the funds to take the next steps with the business,” he explained.

“We needed a pie press, which is a large lever with a press mechanism that speeds up the process of making our product considerably.”

“After getting some advice from The Nottingham Business Venture, we applied for a loan from the Charity. Alongside the form, we provided The Sir Thomas White Loan Charity with our business plan and I later met with three trustees. During that meeting we discussed the business, the potential that the business had and my ambitions for the future.”

With Pete’s business loan approved, Incredible Pies was provided with an opportunity to move forward, whilst also allowing the sibling duo to broaden their range of products.

“Our regular markets are growing all the time as we build up regular customers,” said Pete. “We are also very much into the science of our products as well now. We’re always experimenting because we simply want to make the best product possible.

“We’re hoping for an exciting future,” he added.

“Our aim is to get the products sold in bulk, so we’ll be contacting restaurants, hotels and pubs with our product. We believe in what we produce, so we’re really keen to see how far we can go.”

Pete’s last words are reserved for any budding entrepreneurs thinking about getting in touch with The Sir Thomas White Loan Charity – a decision he would endorse emphatically.

“The trustees I met were all lovely. Anyone thinking of applying should go for it.

“Don’t be put off if you think it will be a pressured experience, because it really isn’t like that at all.”

For more information on Incredible Pies, please visit incrediblepies.com. The company is also on Facebook and Twitter – so you can also engage with Pete and Rob on social media.

If you would like to follow in their footsteps and step into business, please CLICK HERE to find out more about The Sir Thomas White Loan Charity’s nine-year interest-free business loans.