A Touch of Glass

The notion of art and creation is certainly not a new concept. It’s evident in all walks of life and is often passed on from generation to generation, evolving and modernising over time to reach possibilities which wouldn’t have seemed plausible in years of the past.

That’s certainly the case for glass art in particular. The practice of glassblowing is said to have begun in the 1st century BC, builders in the Middle Ages introduced stained glass windows as a new form of architecture and later, at the turn of the 19th century, mechanical bottle blowing opened up even more opportunities for innovation.

Having studied glass during A Levels, Kat (pictured, right) started a Decorative Arts course at Nottingham Trent University and began learning about several different materials, including metal and wood, before specialising in glass in her second year of studies.

“It was a very varied course and I was able to experiment with lots of materials in the first year, but I knew I wanted to focus on glass so it went from there really,” Kat explained.

“After completing my degree a few of us were selected to take part in New Designers. It’s an event for the best makers of the year, so I felt very lucky to be selected. There were six of us from the course that went. After going to New Designers I managed to get a stall at Handmade in Britain in Chelsea. At this point it was starting to gather momentum and I knew I had to make lots of items for the exhibition so I thought it was the perfect time to open up my own studio.”

Based in Loughborough, Kat produces a wide range of stunning glass products from her studio; all of varying shapes and sizes in order to keep inclusivity at the heart of her business.

“I do everything from small scale up to large statement pieces,” she explained. 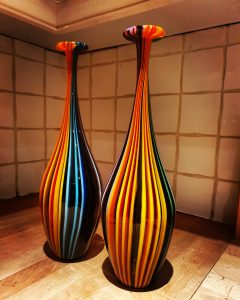 “I like my products to be accessible to all. People love my large statement pieces which start at £320 but some people can’t afford that, so from the off-cuts of those statement pieces I make small pieces of jewellery so they can buy something that has the same style, but at a much cheaper price. I create pieces including coasters, dishes, jewellery, vases and bowls. For larger statement pieces I make the Striped Vessel (pictured, left), which is my signature range. I’ve recently started making furniture as well, including glass coffee tables, and I know a carpenter who helps me with the wood work.”

Epitomising the creative nature of her work, Kat also has a passion for recycling and often finds a use for bottles or recycled glass, giving discarded materials a new lease of life by forming items such as candles. Meanwhile, her impressive work on small-scale items has resulted in fabulous opportunities on a much larger stage, including a commission to design and create all glass aspects for the Hope Street Hotel’s spa in Liverpool.

“They gave me a brief to look at water and ice – and I interpreted it in my own way,” recalled Kat, thinking back to the project which initially began in February of last year. 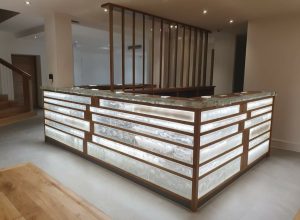 “First I made an ice bowl, which is part of a treatment and sits on a plinth of Portland Stone and cast glass blocks that I have made. People can walk in and literally pick up ice from the bowl and put onto their face to cool down. They liked the ‘wow factor’ of the bowl and wanted more, so we moved on to the reception desk (pictured, right). This was a much bigger project. It’s nine metres all the way round and I made glass panels with different textures that went all around, with cast glass pieces creating blocks of ice for the top of the reception desk. I also made huge, floor-to-ceiling shards of glass with fused glass decorations on, so it’s a bit like an art journey through the spa. I’m really pleased with how it looks.”

It’s clear to see that Kat’s passion, creativity and drive has been central to her fabulous achievements so far, but she is also quick to recognise the role of The Sir Thomas White Loan Charity in helping to establish the foundations from which she has since built on.

“The loan was such a huge help to me at that point in time,” she reflected.

“It was about nine years ago now. I remember hearing about the Charity from speaking with my hairdresser, so I just went for it. I was really nervous for the interview and I probably overwhelmed everyone with the glass pieces I took, but they were all really lovely. There were three people in the interview and they were all really friendly and approachable. The funds I got initially were spent on my kiln, which is my biggest machine. As it goes up to at least 1,000 degrees centigrade, for the electric I had to have my electricity converted to three phase at the studio. Quite a lot of money went on that as well, just for me to be able to use the kiln. The kiln is worth about £10,000 now but back then I paid £5,500 for it. I wouldn’t have been able to find that money without the Charity, so they were very important and opened up a lot of new avenues for me.” 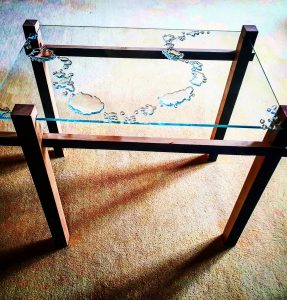 “You don’t pay anything back for three years so even if you’re not doing so well at the start, you don’t have that pressure of repayments hanging over you from the get-go,” added Kat, who now also teaches from her studio, at the University of Leicester and at galleries around the country.

“It’s great that it’s interest-free, that really helps people. If it was a case where the longer you have the money the more you have to pay back, I think I’d be really panicking about that! That would be really scary for someone like me – and others I’m sure. The support from the Charity has been fantastic and I certainly wouldn’t hesitate in recommending them to others.”