No matter where you are in the county of Leicestershire, you’re never too far from the welcoming arms of a Steamin’ Billy pub.

Many enjoy the relaxed surroundings of The Parcel Yard after a train journey into the city, whilst others savour locally-sourced ingredients from seasonal menus at the company’s food establishments; all of which serve a unique selection of iconic Steamin’ Billy ales.

Put simply, if you’ve never been to a Steamin’ Billy pub, you’re likely to have heard of one; which is a true testament to the colossal profile the company now has across the county.

Before we proudly explain how The Sir Thomas White Loan Charity influenced a chapter of this incredible story, we’ll take you back to before the turn of the century through the eyes of Billy Allingham (pictured), who alongside Barry Lount, is co-founder of the Steamin’ Billy brand. 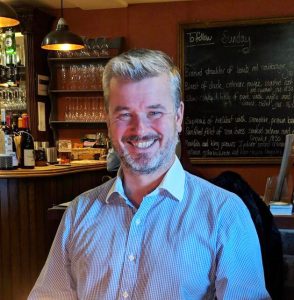 “In around the year 1990, my mum and dad owned a hotel and there were three campsites within walking distance,” explains Billy.

“I remember asking the walkers if they’d like to see some guest beers in the hotel which were different to the traditional local beers – and they said yes. One man brought a barrel of Shepherd Neame and it had all gone within an hour. I could see the demand was there so I wanted to take things further by using a wholesaler to supply my guest beers.

“One day, I went to the house of my wholesaler and saw that he’d built a micro-brewery in the garage. I had a potato peeling shed at my parents’ hotel that was bigger than what he had so I thought, ‘I’m going to give this a go myself’. That’s what got me into brewing.”

Billy started selling his guest beers in Derby before moving to Leicester, but it was here where he encountered a problem. He soon discovered that the vast majority of pubs in Leicester were owned by brewery chains and very few were free houses, severely limiting his opportunities to sell guest beers. However, one avenue open to Billy was The Cow & Plough in Oadby, which was owned by Barry Lount at the time.

Barry asked Billy to brew a house beer for The Cow & Plough and that’s where the foundations for Steamin’ Billy were laid. The beer he produced was well received and later named after Barry’s dog, Billy, who used to chase rabbits across the Leicestershire countryside and return home panting with steam rising from his back. Steamin’ – as the locals would say.

“I was supplying The Cow & Plough but there wasn’t really anywhere else so I said to Barry, ‘why don’t we start a free house in Leicester?’ he continues.

“The first one we opened was The Vaults on Wellington Street in 1996. This became Leicester’s premier real ale house and enabled us to sell quality, guest beers to people in Leicester.”

From this point, having made a promising start at The Vaults, both men had ambitions to grow the brand and establish new properties, which is where The Sir Thomas White Loan Charity came in to play a key role.

“I saw an advert in the Leicester Mercury for some space near Leicester Train Station. Somebody showed us around and it was in a terrible state – it was derelict and hadn’t been used for 25 years. We wanted to refurbish the property but needed financial support, which is why I contacted The Sir Thomas White Loan Charity in 1999.

“My business partner, Barry, was very traditional and there is a big age gap between us. I wanted to open a young and trendy cocktail bar but he wasn’t interested, so we couldn’t use our money from Steamin’ Billy. I wanted to head in a different direction which is why I approached Sir Thomas White to request £10,000 to put towards the refurbishment.

“That was approved and I opened the place up, calling it Time Bar. It was a branch out from Steamin’ Billy – or Cow & Plough as we were known at the time – and then we merged them back together about 16 years later. For a period, Time Bar was a standalone project but then we changed the name to The Parcel Yard and moved it under the Steamin’ Billy brand.

“I didn’t have any money at the time so that loan from Sir Thomas White was massive,” says Billy, highlighting the enormous impact The Sir Thomas White Loan Charity can have on new and existing businesses in Leicestershire.

“I heard about the Charity through a colleague. He said his friend’s son had borrowed money and they were fantastic, so he recommended them to me. I applied, put my business plan and proposal together, did the interview and it was approved. I remember one of the trustees, Chris Sturmey, used to come every three to six months to see how things were going, which was helpful. I think it’s a brilliant charity and superbly run.”

Despite operating in challenging times in an unforgiving industry, the Steamin’ Billy brand has since reached incredible heights, with 10 pubs currently running in Leicestershire and Derbyshire; six of which also serve food. 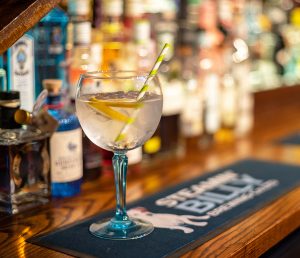 “We hold a set of key values,” says Billy, when asked for his recipe for success.

“We like to buy struggling pubs in struggling areas and make them better. It’s all about exceeding customer expectations. We have a central Steamin’ Billy website but all of our pubs have a landlord. These landlords are able to run their pubs as they see fit, within certain parameters that we set out.

“We’re in a fast changing world as far as pubs are concerned,” Billy adds, providing an honest account of the food and drink industry and the changing behaviours of the younger age demographic.

“20,000 pubs have closed in the last 10 years. But for every pub that’s closed in the last five years, a coffee shop has opened in its place. People are socialising differently now. 25% of millennials don’t drink alcohol. 30% of students don’t drink alcohol. We used to go to Freshers’ Fair and give away free samples of Skittles Vodka and we were the biggest stall. We’d have over 200 students a time coming into Time Bar. But that just doesn’t happen anymore. That’s one of the reasons why I’ve since opened up a bowling alley (East Street Lanes) and a crazy golf course (Caddyshackers). The younger generation don’t drink as much and health is a high priority now. It’s a rapidly changing world and we need to keep up.”

Whatever lies ahead, the story of Steamin’ Billy continues to act as an inspiration to many and a reminder of the endless possibilities available through The Sir Thomas White Loan Charity’s interest-free business loans.

“I think Leicester is very lucky to have someone leave that money to a charity in Leicester for such a good purpose. I know the Charity helps a lot of people with their education loans too, so it’s not just businesses that benefit. Sir Thomas White played a big part in the early stages of our journey and I’m sure they’ll continue to support local businesses for many years to come.”