In itself, St John’s College is a fitting venue for the event. Founded in 1855 by Sir Thomas White himself, the college was originally established as a men’s college – but has been coeducational since 1979. 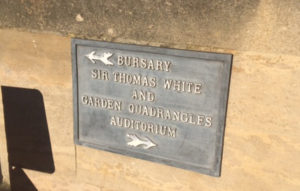 The Sir Thomas White Loan Charity were the grateful recipients of a cheque for £251,095. This figure is to be added to the charity’s existing fund and will be utilised to provide interest-free business and education loans to people aged over 18 and under 35 in Leicester, Leicestershire and Rutland.

In addition to receiving additional funds to allow the charity to continue its work within the county, The Sir Thomas White Loan Charity representatives were also able to make the most of the annual opportunity to meet with other Sir Thomas White charities, including those based in Northampton and Warwick, so as to learn more about their work.

To get in touch with The Sir Thomas White Loan Charity to find out more about the interest-free business and education loans available to 18-35s in Leicestershire and Rutland, please email info@stwcharity.co.uk or call 0116 204 6620.