In our latest blog, Sir Thomas White Loan Charity Trustee, Anne Whitlock, provides an insight into one of the main roles held by the Trustees; annual visits to business borrowers and/or their respective businesses…

As a Trustee of The Sir Thomas White Loan Charity, you have a few regular commitments, one of which is to visit our business loan borrowers. Immediately, you may think that it’s to check up and ensure the funding provided by the charity is put to good use and, in part, you’d be right. However, for us it is so much more than that. It’s a great opportunity to chat to borrowers to see how their business is going and to hear about plans for the future.

Recently, I had the pleasure of meeting Tom Flowers, who borrowed from the charity in 2016 to establish his cricket coaching business. Living close by, I took the opportunity to being the third Trustee to visit him since he took out his loan.

What happens before a visit?

Before the visit, I am sent the information that the charity has on Tom to date, such as details of how much he borrowed, when the sum is due to be paid back, previous accounts and notes provided by other Trustees from their visits. It gives me a great opportunity to make notes of things I want to ask, before getting in touch with Tom to set up our meeting. Before I dialled a single number, I could see how well Tom was getting on, so my interest was in how he was coping with his success and any challenges arising from it. 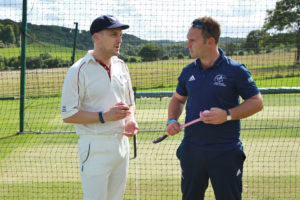 Tom and I met in a local café, starting our meeting with a general conversation about the business in general. Tom is a classic success story example. His business idea came from something he’s really good at and passionate about – cricket. Having played professionally, Tom had coached in schools before taking the plunge to set up his own coaching company. Despite that background, Tom revealed that he never assumed to ‘know it all’. He undertook 12 weeks of market research on all UK coaching academies before forming his own ideas. Tom informed me he found out about The Sir Thomas White Loan Charity from a friend, who recommended us and acted as the safety net when it came to encouraging Tom to be brave and go for it. The loan he took out was used to purchase two bowling machines immediately. 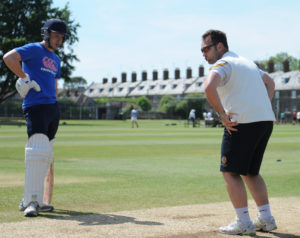 Looking at Tom’s accounts, he informed me that both turnover and profit for the financial year just ended are both predicted to have increased, which is fantastic. It was also great to hear how comfortable and confident Tom was in delivering his facts and figures, showcasing the way he’s been able to learn about the book-keeping element of running a business. It’s something new to many business borrowers, who admit they require support in this area, but three years down the line Tom knew the answer to every one of my questions.

Tom has expanded into franchising also, with another coach taken on further afield to work under the Tom Flowers Cricket Coaching Ltd brand – and it is now one of eight cricket coaching companies to currently be working with The Root Academy, headed by England captain, Joe Root.

The future is bright…

With a very clear idea of his business, Tom revealed that he has always tried to make long-term decisions and do things properly. He also admitted that he now feels like more of a businessman than a cricketer, with the business side now interesting him most. It was something I felt was key to his success. That success has brought challenges, though. With so many freelance coaches to juggle across so many venues and events, in addition to after-school coaching sessions, summer schools and elite courses, it can be 24/7 for Tom. Like many business owners, he admits it’s hard to draw the line, but revealed his tires to switch between ‘business Tom’ and ‘home Tom’ by turning his phone off a couple of evenings a week.

I left the meeting in little doubt that Tom would be able to meet the terms of his loan, which he’s due to commence repaying next year. I was so impressed with all he has achieved to date and with his desire to achieve more moving forward.